“Dan McMillan’s book is clearly written, well-structured, and rests on good acquaintance with recent research. It offers a thoughtful and intelligent answer for a non-specialist readership to the vital but often strangely ignored question: what caused the Holocaust? It deserves to be widely read.”
Sir Ian Kershaw, author of Hitler and The End: The Defiance and Destruction of Hitler’s Germany, 1944-1945 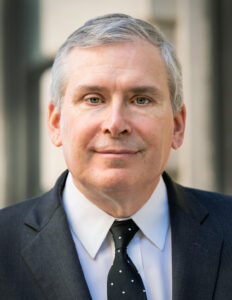 Dan McMillan is an author who lives in New York City and writes about history and politics. Dan began his career as an academic historian specializing in modern Germany. He holds a history Ph.D. from Columbia University as well as a J.D. from Fordham Law School. Having worked as a history professor and as a prosecuting attorney, Dr. McMillan published his first book with Basic Books in 2014. Titled How Could This Happen: Explaining the Holocaust, this book gives the general public a concise and accessible synthesis of what historians have learned about the causes of the genocide. It has received enthusiastic praise from leading scholars.

Dan’s next book is titled Get Money out of Politics. The Time is Now. In this book and in shorter pieces that come out of his research, Dan will help our fellow Americans understand how organized money has broken our political system and robbed us all of our rightful say in how we are governed. Dan has concluded that by far the best approach to fixing the money problem – and probably the only reform that the Supreme Court would not strike down – is a Democracy Dollars system. To build support among the American people for Democracy Dollars, Dan founded and leads Save Democracy in America, a non-partisan organization that is getting traction on both sides of the aisle. Democracy Dollars can be a unifying issue that brings Republicans and Democrats together to take our country back.

Dan brings an unusual background to the problem of money in politics. Well-read in American history and able to compare our country to Germany and other countries, Dan appreciates that for all our flaws, we Americans are the only nation which stands for ideals, including government by the people. Dan sees what our politicians have forgotten: that we the people used to call the shots in Washington, and if we did it before we can do it again. His legal training lets Dan understand why the Supreme Court has gutted our campaign finance laws and why Democracy Dollars may be the only reform that can get past the Court.

Writing in a lively journalistic style, Dan makes these complex issues not only accessible, but sometimes even fun. He is also a capable and enthusiastic public speaker. To invite Dan to speak, please use the link on the Contacts page, or email Dan’s publicist, Maria Sliwa: maria (at) msliwa.com.